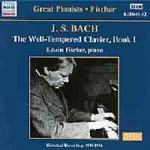 "Here he is, then, at his most sublimely poised and unruffled, at bargain price in beautifully restored sound."
The Gramophone Classical Music Guide 2010

"Edwin Fischer's recording of the '48' was the first by a pianist of the set, and probably remains the finest of all.
Fischer might have agreed with András Schiff that Bach is the 'most romantic of all composers', for his superfine musicianship seems to live and breathe in another world. His sonority is as ravishing as it's apt, never beautiful for its own sake, and graced with a pedal technique so subtle that it results in a light and shade, a subdued sparkle or pointed sense of repartee that eludes lesser artists. No matter what complexity Bach throws at him, Fischer resolves it with a disarming poise and limpidity. All this is a far cry from, say, Glenn Gould's egotism in the '48'. Fischer showed a deep humility before great art, making the singling out of one or another of his performances an impertinence.
In Book 2, you could hardly imagine a more seraphic utterance in No 3, later contrasted with the most skittish allegro reply. He possessed a touch with 'the strength and softness of a lion's velvet paw', and there are few recordings from which today's generation of pianists could learn so much; could absorb his way of transforming a supposedly learned tome into a fountain of limitless magic and resource. Here he is, then, at his most sublimely poised and unruffled, at bargain price in beautifully restored sound."
The Gramophone Classical Music Guide 2010