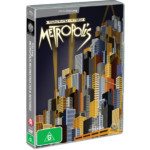 Fritz Lang's 1927 masterpiece 'Metropolis' is perhaps the most famous and influential of all silent films - the inspiration for science fiction epics from 'Star Wars' to 'The Matrix'. However the 'Metropolis' we have seen until now has been incomplete - the product of desperate distributors and overzealous editors in the 1920s. For years it was believed that the Lang's original 2½ hour cut had been lost. Then, in 2008, a cache of film was discovered at Buenos Aires' Museo del Cine...

More than 25 minutes of 'new' footage has now been painstakingly restored. Accompanied by a new recording of Gottfried Huppetz' original score, 'Metropolis' is the crowning achievement of German Expressionist cinema. 84 years after its first release, Lang's vision of a dystopian future - where the rich live in splendid luxury, while a literal underclass toil in a vast subterranean workshop - can be seen as the director originally intended.