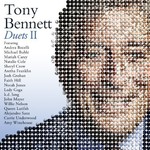 Tony performs more of his his classic hits with the biggest stars on CD + DVD - including the late Amy Winehouse, Lady Gaga, Michael Buble, k.d. lang, Norah Jones and Willie Nelson, among other stellar musicians.

The following is Tony Bennett's statement on the passing of Amy Winehouse: "Amy Winehouse was an artist of immense proportions and I am deeply saddened to learn of her tragic passing. She was an extraordinary musician with a rare intuition as a vocalist and I am truly devastated that her exceptional talent has come to such an early end. She was a lovely and intelligent person and when we recorded together she gave a soulful and extraordinary performance. I was honored to have the opportunity to sing with her. It had been my sincere hope that she would be able to overcome the issues she was battling and I send my deepest sympathy to her father Mitchell, her entire family and all of those who loved her."

Some of country's biggest names have joined the round-up including Faith Hill, Willie Nelson and Carrie Underwood. From the international pantheon: angel-voiced tenor Andrea Bocelli from Italy and Latino singer-songwriter Alejandro Sanz from Spain. Josh Groban and John Mayer also collaborated with Bennett. Michael Bublé and k.d. lang who were both featured on the original 'Duets' CD have returned for 'Duets II'.

Disc 1 - CD:
1. The Lady Is A Tramp (with Lady Gaga)
2. One For My Baby (And One More For The Road) (with John Mayer)
3. Body And Soul (with Amy Winehouse)
4. Don't Get Around Much Anymore (with Michael Bublé)
5. Blue Velvet (with k.d. lang)
6. How Do You Keep The Music Playing (with Aretha Franklin)
7. The Girl I Love (with Sheryl Crow)
8. On The Sunny Side of the Street (Willie Nelson)
9. Who Can I Turn To (When Nobody Needs Me) (with Queen Latifah)
10. Speak Low (with Norah Jones)
11. This Is All I Ask (with Josh Groban)
12. Watch What Happens (with Natalie Cole)
13. Stranger In Paradise (with Andrea Bocelli)
14. The Way You Look Tonight (with Faith Hill)
15. Yesterday I Heard The Rain (with Alejandro Sanz)
16. It Had To Be You (with Carrie Underwood)
17. When Do The Bells Ring For Me (with Mariah Carey)