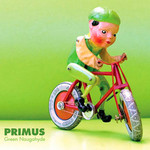 With that rare combination of virtuosity and humor, Primus have always been able to push the envelope creatively without ever falling victim to the kind of navel-gazing that can plague more prog-oriented bands, making them turn inward until there's nothing left but theory. On its seventh studio album, Green Naugahyde, the band continues this tradition with a collection of songs that are both technically dazzling and perfectly irreverent.

In a lot of ways, the album feels like Primus are getting back to basics, with songs like "Hennepin Crawler" immediately evoking the directness of Frizzle Fry. This is in part thanks to drummer Jay Lane, who helped to shape Primus' sound before they made their debut (and also played in Sausage with Claypool and early Primus guitarist Todd Huth). In a way, Lane's reunion with Primus helps to freshen up their sound by taking it back to where it was in the band's strongest era, recapturing the magic of those earlier albums in a way that evokes them without feeling like he's ripping them off. While fans might be disappointed that the album doesn't feature "Herb" Alexander, they'll have a hard time being disappointed with Green Naugahyde, an album that will satisfy those in the know while continuing, as Primus always have, to baffle the uninitiated.
4 / 5 All Music Guide.