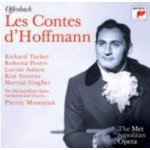 A renowned master of the French repertoire, Pierre Monteux conducts this performance of Offenbach's operatic masterpiece, Les Contes d'Hoffmann. With Richard Tucker taking the demanding title role, Hoffmann's tales of the women he has loved have seldom been told so poetically, or with such a silvery, heroic tone. Hoffmann's three failed loves are sung by a trio of Met stars: Roberta Peters (the doll Olympia), Risë Stevens (the duplicitous courtesan Giulietta), and Lucine Amara (the doomed singer Antonia). Mildred Miller sings Nicklausse and the great French baritone Martial Singher sings all four of Hoffmann's nemeses.