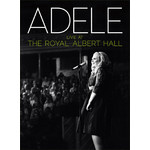 It's been an incredible year for Adele, starting with her #1 album '21', her #1 single "Someone Like You", the global smash "Rolling In The Deep" and her spellbinding live appearance on The Brits.

Her album '21' has become the biggest selling album in the world in 2011 - 12 million copies sold and counting - and '21' and '19' remain the UK's first- and second-highest selling albums so far. She has received rave reviews for her live shows and 'Live At The Royal Albert Hall', recorded at the height of this amazing year, showcases exactly why Adele has become one of the most sought after live performers in the world.

'Live At The Royal Albert Hall' features the full 90 minute performance, plus behind the scenes footage shot throughout that day. The package also contains an exclusive live CD of the entire show. This is the first time fans will be able to hear all of Adele's hits and best loved songs on one CD plus her stunning covers of Bonnie Raitt's "If I Can't Make You Love Me" and The Steeldrivers "If It Hadn't Been For Love"

Live At The Rainbow DVD