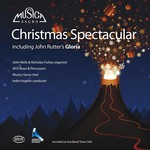 "What sets this stunning CD apart from the plethora of similar Christmas choir and organ CDs is that it avoids the often over-reverberant, stained-glass window sound-world of distant, ethereal Cathedral organs, boys and men choir and liturgical carol services. Instead, we are in the quite different, concert-hall acoustics of Auckland Town Hall, listening to the splendid Klais-rebuilt civic organ, symphony orchestra brass and percussion players, and a mixed-voice concert choir which can be puckish and playful as well as religioso and reverent."
Martin Setchell writing in ORGANZ [periodical publication of the Organists Association of New Zealand]

There is some 'serious' classical music as well as lighter, more popular fare: we think that there is something for everybody in this programme.