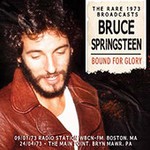 Bruce's first ever radio broadcasts - available at last! Springsteen had signed a recording deal with Columbia in mid-72 and had been working on his debut record since...

By mid-1972 the rock landscape was looking decidedly dull. The search for a new Beatles or a new Dylan to re-unite the Woodstock generation and their younger siblings had come to nothing and the natives were getting restless. So when word began to filter through of new-kid-on-the-block Bruce Springsteen breaking out of home city Asbury Park, New Jersey, and playing shows nationwide that reconfirmed audiences faith in the redemptive power of rock n roll, hope began to restore.

Bruce had signed a recording deal with Columbia in mid-72 and had been working on his debut record since. 'Greetings From Asbury Park' saw the light of day in early 73, and within the week Springsteen, with a little help from three of the soon to be named East Street Band, were performing their first ever radio broadcast, aired on Boston s WBCN FM.

A quite remarkable performance ensued with Bruce and the boys in excellent humour and fine form as they played a terrific set, although remarkably including just one cut from 'Greetings'. The show was an intimate affair without an audience but gave listeners their first glimpse into Springsteen s infectious personality, enormous enthusiasm and unique sense of humour. It also drove home the message that here was an artist who could prove to be the new messiah, with songs that quite beggared belief.

The second show featured on this disc is Bruce's very first broadcast from the Main Point venue in Bryn Mawr, just outside Philadelphia - the venue at which Bruce's most prestigious and highly regarded broadcast was made, the astonishing 1975 gig that has also recently been released.

This April 1973 set differs widely from the January 73 show as the full band (drummer Vini Lopez joins proceedings) rock out, and comparisons with the largely acoustic Boston broadcast remain fascinating. That was pretty good, Bruce is heard to mutter as the final track of this broadcast draws to a close - providing the perfect understatement for the burgeoning talent heard maturing in these two broadcasts, and equally for the shows themselves, as just one listen to this remarkable CD will testify.