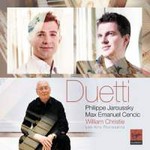 Two star countertenors, Philippe Jaroussky and Max Emanuel Cencic, join William Christie and Les Arts Florissants, for a programme of chamber-scale duets and arias by Italian composers of the early 18th century. As Jaroussky says, these are "duets of great beauty, where the two voices entwine in a way that is sometimes very sophisticated, but also very sensual."

The contrasting and complementary talents of two star countertenors, Philippe Jaroussky and Max Emanuel Cencic, come to the fore in this programme of chamber-scale duets and arias by Italian composers of the early 18th century: Porpora, Mancini, Bononcini, Marcello, Conti and Alessandro Scarlatti. Two instrumental items by Corelli are also included in this richly filled programme, based on concerts presented by Jaroussky, Cencic and Les Arts Florissants under William Christie's direction in France and Spain in early 2011.

Both countertenors are virtuosic performers, but Jaroussky is especially famed for the gracefulness of his vocalism, whether in brilliant castrato arias or his Virgin Classics album of belle époque song, Opium, while Cencic favours a more assertive and athletic style, which served him well in his breathtaking recital of Rossini arias for Virgin Classics.