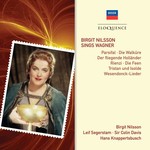 Birgit Nilsson. Richard Wagner. It was an operatic marriage made in heaven that lasted for over twenty years and, thanks to recordings, continues to thrill music lovers around the world. She sang her first Wagnerian part in Stockholm. It was Senta in Der fliegende Holländer. It was greeted rapturously and throughout her long career it was for her Wagner and Strauss roles that she was most noted. Many of the greatest recordings of music dramas and operas by these composers have featured her, and many appear on Decca. However, she also made two Wagner records for Philips - one with Leif Segerstam in 1974 of extended scenes from Walküre and Parsifal, another, in 1972, with Colin Davis of the Wesendonck-Lieder and extracts from Der fliegende Holländer, Rienzi and the little-known early Wagner opera, Die Feen (The Fairies). Also included are scenes from Tristan und Isolde, one of her great calling cards and of which she made at least two live recordings, one studio recording with Georg Solti, and another of scenes (with Grace Hoffman as Brangäne) with Hans Knappertsbusch.

Nilsson's voice had the clear, silvery sound that seems to be characteristic of Scandinavian singers. It was rock solid, encompassed over two octaves, and was perfectly even, top to bottom. It was also enormous. Especially in the upper part of the voice it could take on a laser-like quality that simply sliced through the densest orchestral sound and speared listeners to the backs of their seats. That meant the great moments of a Wagnerian opera were truly monumental - a surging orchestra and a soprano who dominated everything, combined into an overwhelming climax as Wagner must have heard in his dreams.

Here is a snapshot of some of those great moments, captured on record, and bringing together three complete LPs - two made for Philips (Segerstam, Davis) and one for Decca (Knappertsbusch).

"Even allowing for the fact that these were demonstration records when they first appeared, the sound on this CD is astonishing in its lifelike presence and its warmth. As nobody has surpassed Knappertsbusch to this day as a Wagner conductor in the inevitable sweep and grandeur of his direction […] What glorious singing Nilsson gives us; full throated in the great passage, "O blinde Augen!", which she ends with an electrifying top B natural, producing another (no mere glancing at the note) on "lacht" just before her thrilling singing of the curse." Gramophone