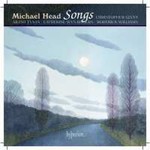 "Christopher Glynn brings out the different colours in accordance with each song, from crashing chords to gurgling gruppetti, sparking little scales to vigorous outpourings or soft sweetness."
(International Record Review)

"[Wyn-Rogers] is laudable in the very sad, well-named Love's Lament...The two lustiest songs, 'Money, O!' and 'My sword for the King' are allotted to Roderick Williams, who brings bold vocalism to both...Christopher Glynn brings out the different colours in accordance with each song, from crashing chords to gurgling gruppetti, sparking little scales to vigorous outpourings or soft sweetness."
(International Record Review)

Who is Michael Head? His name may be largely forgotten but the music here forms part of the rich seam of English song in the manner of Quilter, Gurney and Warlock. Born in 1900, he worked modestly as a singer, pianist, teacher, broadcaster and adjudicator, writing his first song (The ships of Arcady) aged 19, studying at the Royal Academy of Music, where he became a professor of piano aged 27, remaining there for the rest of his career.

At the centre of his composing life were songs, which he used to perform as a kind of one-man band, accompanying himself at the piano. Out of more than 100, here's a choice selection: setting poets such as Walter de la Mare, John Masefield and Christina Rossetti, many of them focus on the pleasures of England-its flora and fauna, its changing seasons and lyrical landscapes.

They're sung by three of the brightest stars in today's vocal firmament, Ailish Tynan (making her Hyperion debut), Catherine Wyn-Rogers and Roderick Williams, accompanied by Christopher Glynn, who adds Head to his previous recordings of Reger and Brahms.

Dear delight
Oh, for a March wind
Sweet chance
Tewkesbury Road
The Estuary
Limehouse Reach
Over the rim of the moon
October Valley
The Garden Seat
Fox Gloves
The Viper
Had I a golden pound
Lean out of the window
A Piper
A green cornfield
Love's lament for comely grace
Star Candles
The Little Road to Bethlehem
Money O!
Songs of Venice (3)
My sword for the King
You cannot dream things lovelier