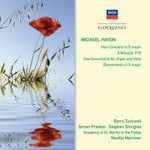 "[The] Duo Concertante is a leisurely, expansive and extremely likeable piece … [it] is played here with spirit and feeling, and with the excellence of ensemble and unanimity of phrasing that one expects from the St. Martin in the Fields Academy. Stephen Shingles's viola tone has a proper touch of reediness … Simon Preston … plays fluently, and phrases sensitively" (Gramophone)

Johann Michael Haydn, brother of Joseph, was a highly proficient composer in his own right who earned the respect and affection of his contemporaries. A Gramophone reviewer described him thus: 'He is a man whose character, it seems to me, always comes clearly through his music: he was cheerful, easygoing, unambitious (also, said the Mozarts, inclined to the bottle)'. In recent decades, his music has begun to be more widely appreciated, due largely to the efforts of the American musicologist Charles Sherman, whose discoveries include this Horn Concerto in D major. This collection, originally issued on Decca's 'Serenata' series in 1993, has long been out of circulation, and offers music of incredible charm and warmth. Hidden, as it were, from history, it is now exhumed on Eloquence for enjoyment.

Divertimento in G major
Members of the Vienna Octet