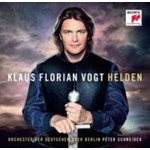 "his Siegmund, naive and ecstatic rather than virile and forceful, is striking. Vogt's vocal ease and cleanness of line is appealing in Weber and Wagner, and he proves an accomplished, elegant Mozartian."
(Guardian)

Klaus Florian Vogt is Bayreuth´s leading tenor - he has a unique voice, perfect technique and last but not least the perfect look for a leading man in the works of Wagner.

He had a triumphant breakthrough success as "Lohengrin" at the world famous Bayreuth Wagner festival in the Summer of 2011. Major media acclaimed his singing as "the third wonder of Bayreuth" and the "...best Lohengrin ever".

Klaus Florian Vogt sings in all major opera houses of the world. In 2012, he will star in new productions in Tokyo (Lohengrin), Munich (Valkyrie) and Barcelona (Florentine Tragedy). He will also feature in roles at Bayreuth.

Helden ("Heroes") is Vogt´s first album for Sony Classical, where he is exclusively signed, and is his first recital recording. The CD shows major pieces linked with him, of course Wagner and the famous "Grahlserzählung" in Lohengrin, but there are also beautiful arias by Weber, Flotow, Korngold and Lortzing - and last not least also by Mozart.

Flotow:
Ach, so fromm (from Martha)