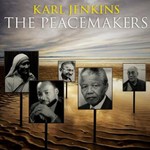 "Just about everyone has been roped in...fans will find this 70-minute plea for peace immaculately performed and recorded." The Times, 24th March 2012 **

'Music has the capacity to breathe harmony into the soul. The Peacemakers breathes the harmony of peace.' Terry Waite CBE

'As a composer, he recognises no boundaries - musical, commercial, geographical or cultural. His is a way of thinking and composing that is perfectly in tune with the spirit of the times.' Classic FM Magazine

The Peacemakers, a brand new choral work composed by Karl Jenkins, offers inspiration and solace for a time in need of both. It features texts from some of the greatest peacemakers throughout history, including Mahatma Gandhi, Martin Luther King Jr., the Dalai Lama, Nelson Mandela, Anne Frank and Mother Teresa, as well as words from the Bible and the Qur'an with some new text specially written by Terry Waite.

The 17 short movements are performed by various combinations of the London Symphony Orchestra, the Rundfunkchor Berlin, City of Birmingham Youth Chorus and 1000-strong choral society The Really Big Chorus, made up of members of UK choirs from across the country brought together in one studio. Guest artists include violinist Chloë Hanslip, soprano Lucy Crowe, Davy Spillane on Uilleann pipes, Indian bansuri (ethnic flute) player Ashwin Srinivasan and jazz greats Nigel Hitchcock and Laurence Cottle.

Karl Jenkins conducted the world premiere of The Peacemakers at Carnegie Hall on 16 January 2012 and will introduce the work in the UK in May 2012, conducting performances at the Bridgewater Hall, Manchester, Royal Festival Hall, London, St. David's Hall, Cardiff and Symphony Hall, Birmingham.

"The Peacemakers is dedicated to the memory of all those who lost their lives during armed conflict and, in particular, innocent civilians," Karl Jenkins said recently. "When I composed The Armed Man: A Mass for Peace for the millennium, it was with the hope of looking forward to a century of peace. Sadly, nothing much has changed." The Armed Man: A Mass for Peace has been enormously successful, having been performed nearly 1000 times in 20 different countries since the CD was released in 2001. In a sense, The Peacemakers could be seen as a sequel to The Armed Man.

"In The Peacemakers," Jenkins continues, "one line from the 13th-century Persian mystic poet Rumi sums up the ethos of the piece: 'All religions, all singing one song: Peace be with you'. Many of the other 'contributors' are figures who have shaped history, others are less well known. I have occasionally placed some text in a musical environment that helps identify its origin or culture: the bansuri (Indian flute) and tabla in the Gandhi; the shakuhachi (a Japanese flute associated with Zen Buddhism) and temple bells in that of the Dalai Lama; African percussion in the Mandela; and echoes of the blues of the deep American South (as well as a quote from Schumann's Träumerei (Dreaming) in my tribute to Martin Luther King. 'Healing Light: a Celtic prayer' is with uilleann pipes and bodhrán drums. "