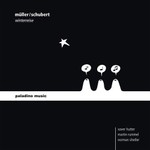 "Paladino's 2012 release "Müller/Schubert Winterreise" consists of a reading of the poetry of Wilhelm Müller. Each poem is followed by the song in a straightforward transcription for piano and cello. It's not a re-imagining like Hans Zender's love-it-or-hate-it - amazingly awesome, if you ask me - "composed interpretation" of Die Winterreise. Obviously, it's certainly not a traditional performance of it either. As such it has the potential to displease those looking for the real deal for mucking with the original and disappoint those whose Schubert-bending willingness knows no bounds for not going far enough.

I'm not enthusiastic about Xaver Hutter's inflection or rhythm but then I'm picky and easily vicariously embarrassed. Even if you didn't like his narration and assuming familiarity with the text, and some grasp of the German, you would still likely hear new nuances in the text, new interpretative angles you might not have thought about. We hear, in short, the text afresh, and we hear the music - through Martin Rummel's forcefully singing cello - in an unheard-of, splendid isolation. I'm not sure how much of a selling argument a fabulous and gutsy cello-performance of the Winterreise could possibly be, but Rummel is making about as good a case for it as can be made. The veteran accompanist, pianist (and part-time puppeteer) Norman Shetler adds his still very much audible musical gifts to the project.

For all kinds of reasons not a natural choice for your third or even fourth recording of Schubert's song-cycle but another curiosity-trophy happily added to my Winterreise collection. Of unintentionally comic value are the liner notes' embarrassingly bad translations: "Impersonation" is not synonymous with "epitome"."
(MusicWeb Aug 2013)