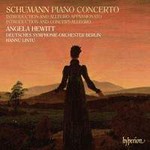 Angela Hewitt's recordings of Schumann's solo piano works for Hyperion have been described as 'revelatory … something to cherish' (Gramophone) and 'unreservedly superb' (The Guardian). Now she turns her attention to the works for piano and orchestra in a magnificent release which includes the beloved Piano Concerto in A minor-one of the most treasured concertos in the repertoire-and two other works also written for Clara Schumann.

Hewitt's trademark clarity of line, and her technical control which never limits the expression of passion, are clearly in evidence. She is supported by the Deutsches Symphonie-Orchester Berlin and the brilliant Finnish conductor Hannu Lintu. A fascinating commentary by Hewitt herself completes this album which is sure to delight her ever-increasing legion of fans.