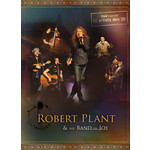 Robert Plant & The Band of Joy
Live From the Artists Den

Robert Plant & The Band of Joy's 'Live From the Artists Den' was filmed as a rare, intimate performance at the magnificent War Memorial Auditorium - a landmark building established in 1925 as a tribute to the thousands of Tennesseans who gave their lives during World War I. A rare snowy day in Nashville set the stage for an even rarer event at the one-of-a-kind venue - a career-spanning concert by rock icon Plant and his Band of Joy, featuring Led Zeppelin favourites, traditional songs, hits from Plant's solo catalogue as well as new material.

Who is Harry Nilsson? (And Why is Everybody Talkin' About Him)