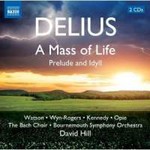 "Alan Opie, who has the lion's share of the solo music in the work, is almost Wotan-like in his performances...Andrew Kennedy, Catherine Wyn-Rogers and Janice Watson also offer fine lyrical interpretations of their solo parts...This is a must for any Delius Liebhaber and...a marvellous starting point for anyone new to Delius's unique but compelling art."
Gramophone Magazine: Editor's Choice - July 2012

"David Hill's impressive new recording with his Bach Choir (in the original German) boasts confident, ardent choral singing and orchestral playing, and a string solo team - even if Alan Opie, representing the prophet Zarathustra, perhaps makes his points with too much Wagnerian declamation at the expense of line....But listeners tempted by Naxos's bargain price into exploring this work won't be disappointed." (BBC Music)

"The singing is suitably majestic for Nietzsche's vision of mankind's destiny...Hill draws some marvellously expressive playing from the BSO, with soloists - chief among them Alan Opie - in magnificent form." (The Observer)