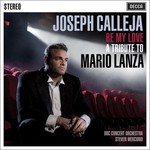 "It's an unashamedly populist collection, Calleja rolling the Rs of "Granada" and "Arrivederci, Roma" with obvious relish in arrangements replete with castanets and trilling mandolins." (The Independent)

"Calleja doesn't suffer from...self-imposed comparisons: the voice is burnished and focused; the top notes whammy yet unforced; the legato tone garnished with saccharine slithers but not sloppy. Calleja doesn't do final consonants; and sometimes you wish his conductor (Steven Mercurio) had encouraged more ebb and flow. But these throbbing ballads will delight Calleja's fans." (TheTimes)

"It's an unashamedly populist collection, Calleja rolling the Rs of "Granada" and "Arrivederci, Roma" with obvious relish in arrangements replete with castanets and trilling mandolins, before building to the full football climax with spirited renditions of "Nessun Dorma" and a mighty "You'll Never Walk Alone"."
(The Independent)

Blessed with a golden-age voice that routinely inspires comparisons with legendary singers, Joseph Calleja follows 2011's success of 'The Maltese Tenor' with a tribute to one of the most popular tenors of all time; the unique star of the Hollywood musical - Mario Lanza.

'Be My Love' is an album that Joseph has always wanted to record. As a young boy in Malta he saw Lanza in the cult film 'The Great Caruso' and was so captivated that he gave up his fondness for Metallica and Iron Maiden, and followed his dream to become an opera singer... now that's some turnaround, eh?

Born in America to Italian parents, Mario Lanza was an International screen idol and recording star with a fan base to rival Elvis Presley. 'Be My Love' features all the Lanza evergreens including "Be My Love" and "You'll Never Walk Alone" as well as opera arias made famous by his movie performances, such as "Addioalla Madre" and "Nessun Dorma".

* Reconstructed by Steven Mecurio from manuscripts from original Lanza performances