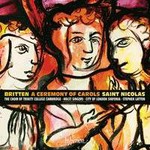 'As the Britten centenary looms into view, it is good to be able to offer an enthusiastic welcome to this sparkling release of two of his 1940s 'classic' scores … Allan Clayton makes the role of Nicolas entirely his own. What a glorious voice! … The hearty sailors, Pickled Boys and St Trinian's-like piano duettists are all on top form. This is a beautiful and deeply affecting recording' (Editor's Choice Gramophone December 2012)

'An ideal coupling … Layton's sopranos and mezzos affect a purity that sounds 'boyish'. Their intonation in the piquant harmonies of Wolcum Yole impresses … In the cantata, Allan Clayton's Nicolas is more youthful-sounding than his predecessors, but Layton captures the mystery-play-like drama of the saint's life story' (The Sunday Times)

2013 sees the centenary of Benjamin Britten's birth and Hyperion starts celebrating early with this disc of two of the composer's most popular choral works, both with a Christmas relevance.

The cantata Saint Nicolas tells the story of the original 'Santa Claus', a fourth-century saint whose acts-revitalizing three boys who had been pickled by an unscrupulous landlord being among the more dramatic-led to his canonization as patron saint of children and sailors. Britten's lively setting is distinctly operatic, full of incident and colour-with the story brought 'home' through the use of congregational hymns. The part of Nicolas (here sung magnificently by Allan Clayton, already acclaimed as the heir to Peter Pears and Anthony Rolfe Johnson) is one of Britten's great heroic tenor roles.

A Ceremony of Carols is a setting for treble voices and harp of some of the medieval texts which Britten loved so much, and is heard every Christmas in cathedrals, churches and concert halls throughout the land. This fresh, sparkling performance completes a thoroughly festive release.