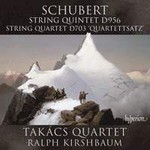 "Their performance, with Ralph Kirshbaum fitting effortlessly into the ensemble as second cellist, is never conceived as a reassuring tour around one of western music's supreme achievements. There's always an undertow of unease...It's a formidably satisfying performance" The Guardian, 25th October 2012 *****

"The recording - wonderfully vivid and "present" - is all that one expects from the producer, Andrew Keener, and the quality of the playing and musical insights is superlative...The sonorities the Takacs players and Kirshbaum bring to this great music are quasi-orchestral, but they convey the intimate pages of the score in a manner that is both soul-baring and deeply moving." Sunday Times, 28th October 2012

The matchless Takács Quartet return to Schubert. Their first disc on Hyperion-his 'Death and the Maiden' and 'Rosamunde' quartets-received unprecedently lavish critical acclaim, acknowledging a new modern benchmark for these works.

Now they turn to perhaps the most hauntingly beautiful of all Schubert's chamber works, the String Quintet-completed six weeks before the composer's death. Schubert included a second cello in the texture, creating a sumptuously warm sound, a cradling intimacy. Here the Takács players are joined by cellist Ralph Kirshbaum. Also recorded here is the 'Quartettsatz': a fragment-of the highest quality-of a String Quartet in C minor abandoned by the composer.