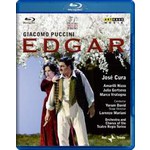 "José Cura as Edgar in disguise, holding forth with burnished tone, and Amarilli Nizza singing "Addio, mio dolce amor" - the one passage that has become fairly well known - with considerable feeling." (Gramophone)

"In Lorenzo Mariani's Turin production, the action is transposed from the 14th century to the time of the Risorgimento. Act 1 finds everyone dressed in white for a summer picnic. When Edgar and Tigrana have escaped to the city in Act 2, it looks like a production of Traviata, with all the men in top hats and the girls in red feathers. Act 3, though, goes with terrific zest, José Cura as Edgar in disguise, holding forth with burnished tone, and Amarilli Nizza singing "Addio, mio dolce amor" - the one passage that has become fairly well known - with considerable feeling. One can sense Puccini grappling with all the diverse influences on his music, a bit of Wagner, a bit of Verdi, a touch of Donizetti... Yoram David controls the huge orchestra and chorus with impressive authority."
(Gramophone)

A fake death, a perverse woman and a pure woman, a man torn between them, a murder: the story of Edgar, Giacomo Puccini's second opera, is full of dramatic turns of events. Arthaus Musik presents this powerful and tragic opera now in a version which was count for lost for nearly 120 years.

For the first time the original version in four acts of Edgar by Giacomo Puccini was staged at the Teatro Regio in Turin in 2008. Thanks to the rediscovery of the manuscript score, after 119 years since the first and only performance in Milan in 1889 and after numerous versions condensing the opera in three acts, it will be again possible to experience the original opera that Puccini wrote. It was only when the American Puccini expert Linda B. Fairtile began reconstructing the original orchestration of the almost 40-minute final act that the composer's granddaughter, Simonetta Puccini, came up with the intact score. José Cura, acclaimed all over the world for his intense interpretations, is Edgar. His rich and brilliant tenor voice, together with his fascinating stage presence, make him one of the most charismatic and sought-after artists in the world. With him, two prima donnas, two artists of great charm and with skyrocketing careers: the Italian soprano Amarilli Nizza and the Russian mezzo-soprano Julia Gertseva.