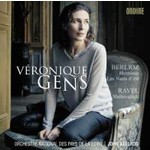 Ondine is delighted to announce a new release from star soprano Véronique Gens, who performs Herminie and Les Nuits d'été by Hector Berlioz and Shéhérazade by Maurice Ravel with the Orchestre National des Pays de la Loire under the baton of their music director John Axelrod.

Véronique Gens is recognised internationally as one of the great sopranos working today. She has forged her career in the baroque repertory and the music of Mozart, but French repertoire, especially Berlioz and Ravel, are "as natural to her as the air that she breathes". Her French remains a model of immaculate diction, both fluid and luminous.

Véronique Gens has a very special relationship to Berlioz's Les Nuits d'été and Herminie, and here combines them on this disc with Shéhérazade by Ravel, which conjures up a totally different world.

The charismatic conductor John Axelrod was appointed music director of the Orchestre National des Pays de la Loire in 2009, and follows the philosophy of being "open to the world" with his extraordinarily diverse repertoire choices and innovative programming. He is sought after across the world both for concerts and opera.

"As you might expect, Gens's singing has sharpened its musical perceptions still further and acquired even more shades of colour since [her] earlier recording. No one today delivers French song with the combination of tonal beauty and verbal nuance she does, and each number of Nuits d'Eté offers a miniature masterclass...Pure ravishment." (The Guardian)

"[Gens is] alive and vivid, giving a passionate account of the wonderful Sur les Lagunes. Elsewhere, she seems to me in too much of a hurry." (Sunday Times)

"warm, sensitive, the lyrical French soprano par excellence...Gens bring [Herminie] to life as sympathetically as any of her operatic portrayals...It is unusual to encounter a recording of Les nuits d'ete in which the colouring is so consistent throughout...Gens has in her sights a purer kind of poetry." (Gramophone)

"In her mid-forties, this voice has become richer and even more expressive, and he works on this disc suit her to perfection. She not only pronounces the words, she feels them...Her Nuits d'ete reilshes hues both light and dark, and if she'd been around to sing Berlioz's Prix de Rome cantata Herminie in 1828, who know, he might have won gold instead of silver!" (BBC Music)