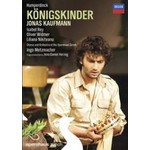 Tenor superstar Jonas Kaufmann leads the cast in the first-ever DVD release of the beautiful fairytale opera from the composer of Hänsel und Gretel.

The German tenor is "the fairytale prince of most opera-goers' dreams - young, reckless, beautiful" (Financial Times), and Isabel Rey is the Goosegirl star in the acclaimed Zurich production of Humperdinck's magical opera

Königskinder - a story of love tested beyond endurance - premiered at New York's Metropolitan Opera in 1910. Humperdinck's setting of the modern fairytale saw him further develop the musical language of his much-loved Hänsel und Gretel. Königskinder is enjoying a revival in popularity with productions planned in several major European houses