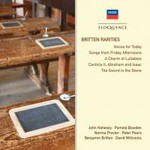 "Britten's underrated United Nations anthem Voices for Today makes it onto disc at last, together with vintage recordings of artists the composer chose to work with." (BBC Music)

"John Hahessy has a splendid strong tone, almost brassy in forte, and a blessedly unaffected style: none of those cautious hoots and beautifully modulated vowels that are the bane of the English choirboy tradition. What is more he evidently has a real natural musicality, to judge by his moulding of phrases throughout this disc." (Gramophone)

This collection brings together rarities and surprises from the Decca/Argo Britten discography, a collection notable as much for the infrequency with which much of this music is performed, as it is for the fact that many of these are world-premiere recordings of Britten's music. The source material itself is extremely rare and virtually every recording represented here is, in its LP/EP format, a collector's item, largely from the Argo catalogue. The all-vocal program opens with Voices for Today which Britten wrote to mark the 20th anniversary of the founding of the United Nations. His devotion to excellent music for children is represented by a collection of songs, including five from Friday Afternoons and sung by the boy alto John Hahessy. It was Hahessy who was chosen over Norma Procter to sing the alto part in Britten's Canticle II 'Abraham and Isaac'. The earlier Procter/Pears/Britten version, recorded in 1957 but not released at the time in favour of the Hahessy recording; it is included on this collection. In later years, it was perhaps inevitable that other British singers would be compared with those who created and inspired Britten's work, notably Ferrier, particularly after her early death. Pamela Bowden was one of those singers: she studied with Ferrier's teacher, Roy Henderson, in London, and was hailed as the singer's successor. She is represented by A Charm of Lullabies and it seemed sensible to include the remainder of the music on her original EP - two songs by Purcell - as bonus tracks for this release. A rare spoken-word appearance is made by author (and speaker) T.H. White, who reads an extract from his book The Sword in the Stone to an accompaniment of Britten's music.

Song Cycles (Incls 'seven Sonnets of Michelangelo' & 'Who are these children')