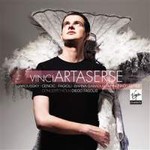 "Cencic and Jaroussky give a masterclass of dramatic countertenor singing, and Valer Barna-Sabadus and Yuriy Mynenko...are not far behind." (Gramophone Recording of the Month January 2013)

"The prison scene that begins Act 3 indicates that Vinci was one of the finest opera composers of his age...The entire cast produces exceptionally good singing. Cencic and Jaroussky give a masterclass of dramatic countertenor singing, and Valer Barna-Sabadus and Yuriy Mynenko...are not far behind." (Gramophone Recording of the Month January 2013)

"Vigorously rhythmic and highly dramatic, the opera has extraordinary energy, and some beautiful moments. This recording brings this all out, partly through the cracking tempi set by Diego Fasolis, partly through Concerto Köln's effervescent, historically informed performance, and partly through the sheer energy of the cast."
(BBC Music)

"I was hooked...The range, lyrical invention and virtuosic demands of [Vinci]'s last stage masterpiece Artaserse - relating dark machinations in ancient Persia - are incredible. And this Concerto Köln performance, with Philippe Jaroussky first among falsetto equals, fizzes with energy"
(The Times)

"the singing is epoch-making, above all from Fagioli, who seems to redefine the capabilities of the countertenor voice and take it beguilingly into territories new. Listen to him, and be seduced."
(The Guardian)

No less than five brilliant countertenors - including Max Emanuel Cencic and Philippe Jaroussky - join conductor Diego Fasolis and Concerto Köln for Artaserse by Leonardo Vinci (1690-1730). In early 18th century Italy, the Neapolitan-born composer was one of the brightest stars in opera, and Artaserse is considered his masterpiece.

This recording of Artaserse by Leonardo Vinci (1690-1730) - born in Naples and, during his short life, celebrated as one of Italy's leading composers of opera - represents the fourth Virgin Classics collaboration between countertenor Max Emanuel Cencic and conductor Diego Fasolis. It follows an album of Handel arias, Handel's opera Faramondo and, in 2011, Vivaldi's opera Farnace, of which The Telegraph wrote: "The performance fairly crackles, with accomplished singing by the flamboyant countertenor Max Emanuel Cencic in the virtuoso title role"

In the words of musicologist Frédéric Delaméa, Artaserse, composed to a libretto by the great Metastasio that was also set by such figures as Gluck, Hasse, Galuppi, JC Bach, Myslivicek and (in English) Arne, "is a key work of baroque opera and the genius of Vinci is still too little known. This Virgin Classics recording, offering vocal and orchestral forces of exceptional quality, allows us to rediscover a figure who, in the course of his brief career, was one of the brightest stars of dramma per musica." The status of Vinci as a composer, and of Artaserse as his masterpiece, is reflected in the observations of the French scholar and traveller Charles de Brosses, who, 10 years after Vinci's death from poisoning, wrote: "Vinci is the Lully of Italy: true, simple, natural, expressive, writing in the most beautiful, uncontrived way for the voice ... Artaserse has a reputation as his finest work, and one of Metastasio's finest too ... It is the most famous Italian opera."

The opera, a story of the Persian emperor Artaxerxes, was first performed in 1730 at the Teatro delle Dame in Rome. At the time, a papal decree banned women from appearing on the stages of the city's theatres, so the entire cast was male, with the female roles sung by castrati. This recording rises to the challenge of single-sex casting with a spectacular line-up of fine countertenors from around the world: Croatian-born Cencic, his frequent sparring partner, the Frenchman Philippe Jaroussky, Franco Fagioli (from Argentina), Valer Barna-Sabadus (from Romania) and Yuriy Mynenko (from Ukraine). Joining them from Germany are a lone tenor, Daniel Behle, and the brilliant Concerto Köln, a leading ensemble in historically informed performance.