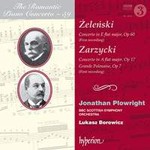 This 59th volume of the Romantic Piano Concerto series features Jonathan Plowright, whose brilliant and utterly idiomatic performances of Romantic Polish piano music have confirmed him as a master of this repertoire. Here he collaborates with the BBC Scottish Symphony Orchestra and Lukasz Borowicz to perform three very obscure but fascinating works. The music of Zelenski has already been championed by Plowright in a disc of Polish chamber music; now he performs his Piano Concerto in E flat major, which was written in 1903 and dedicated to the young Ignacy Friedman, who gave the premiere the following year.

A Piano Concerto in A flat major by Aleksander Zarzycki is also included, plus his barnstorming Grande Polonaise, an outrageous masterpiece which is unknown even in specialist piano circles.

'Żeleński's E flat major Concerto is the more interesting work … the soloist is kept busy throughout. And who better to do the business than that alchemist among keyboard players, Jonathan Plowright, who has that rare ability to turn second-rate music into masterpieces … buy the album for the Żeleński finale alone. A word, too, about his conductor Łukasz Borowicz who catches spot-on every tricky twist and turn and inspires the BBC Scottish players in their cracking accompaniment. We'll be hearing a lot more of him' (Gramophone)

'Even in the crowded field of rare Romantic Piano Concertos, the Polish composers Żeleński and Zarzycki have something particularly satisfying to bring Hyperion's invaluable series … Żeleński's Concerto is an imposing piece: its technical challenges are exhilaratingly dispatched by Jonathan Plowright, while no detail of its dark Slavonic colouring escapes the attention of the conductor Łukasz Borowicz, who draws finely responsive accompaniments from the BBC Scottish Symphony Orchestra … Zarzycki's Grande Polonaise recalls Chopin in its sparkling elegance. It's performed with the right degree of stately swagger' (BBC Music Magazine)