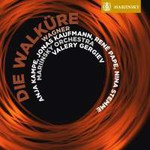 "Act I has Jonas Kaufmann's heroic, poetic Siegmund at the peak of his powers, partnering a limpid, youthful-sounding Sieglinde in Anja Kampe - a dream pair of Wälsung twins for our time, and one to compare with the greatest on disc." (Sunday Times)

"Wagnerites will not be disappointed...[Gergiev] he has imported what is arguably the best quartet of principals available today for this opera - Stemme's classic Brünnhilde, Kampe's exciting Sieglinde, Pape's heavyweight Wotan and, yes, the peerless Kaufmann." (Financial Times)

"Act I has Jonas Kaufmann's heroic, poetic Siegmund at the peak of his powers, partnering a limpid, youthful-sounding Sieglinde in Anja Kampe - a dream pair of Wälsung twins for our time, and one to compare with the greatest on disc. Nina Stemme's Brünnhilde, too, is a Valkyrie for the ages...She is one of the most complete and musical Brünnhildes ever recorded" (Sunday Times)

"The voices are what really win in this production, with not a weak link anywhere. Rene Papé is becoming the Wotan in our day and age, his voice strong and steely in timbre while adroitly subtle in those moments where less force is required. Anja Kampe brings an invigoratingly refreshing Sieglinde with no noticeable weaknesses in her voice, always prepared for her high soaring lines without sounding in the least stressed or strained. Nina Stemme's Brünnhilde makes one long for the rest of this Ring to continue as she find new ways to expressively convey the feelings of the punished warrior in a manner not always in your face and confrontational." (Five Stars AudAud.com)

"In the first act at least, with Jonas Kaufmann as an incomparable Siegmund, Anja Kampe a profoundly moving Sieglinde and Gergiev pacing the performance to an overwhelming climax, the result is spellbinding...In fact, few performances on disc can match it for sheer excitement, or for Kaufmann's blend of easy power, immaculate diction and lyric beauty...a fine beginning to what promises to be a very worthwhile cycle." (Guardian)

'Nina Stemme, in particular, is a magnificent Brünnhilde, emphasising the humanity of a woman discovering the meaning of love rather than the fierce Amazon. She stands in powerful contrast to the awesomely implacable Wotan of René Pape, and together they make something greatly moving at the end of the renunciations in the third act.'Telegraph

'With a full-throttle 'Ride of the Valkyries' and some sumptuous orchestral playing, this is a Die Walküre to be reckoned with.'Classical Source

In February 2013 the Mariinsky label launches its most ambitious project to date, releasing the first title in a cycle of Richard Wagner's Der Ring des Nibelungen conducted by Valery Gergiev. Recorded in the sumptuous acoustic of the Mariinsky Concert Hall, the cycle features a sensational cast, helping create the most finely crafted Ring cycle of modern times.

The first release features Die Walküre, starring Anja Kampe, Jonas Kaufmann, René Pape, Nina Stemme, Mikhail Petrenko and Ekaterina Gubanova. Recorded during sessions and performances in 2011 and 2012, it will be released internationally in February 2013 in a 4-disc Super Audio CD box and as a high resolution download. This will be followed in September 2013 by the Das Rheingold (chronologically the first opera in the cycle, although originally envisaged as a prelude by Wagner) with Siegfried and Götterdämmerung completing the cycle in 2014.

Der Ring des Nibelungen was the pinnacle of Richard Wagner's long and turbulent career and without question one of the greatest achievements in opera. Wagner wanted to create the perfect synthesis of music and drama and assumed total creative control of the project which was to take him 26 years to complete, with frequent interruptions. He introduced numerous innovations, not least the sheer scale of the project - typically a complete performance will last in excess of 15 hours, spread over four evening. No other opera matches the scale or ambition of the Ring. The Mariinsky Theatre has close connections with Wagner and his music. The composer conducted at the theatre and was even offered the post of Music Director. It is also believed to be the first place where any of the music from the Ring was performed. Since Valery Gergiev became Music Director of the Mariinsky, Wagner's music has once again become a core part of the theatre's repertoire, both in St Petersburg and on tour. The Mariinsky label's recording of Wagner's final opera Parsifal starring René Pape, Gary Lehmann and Violetta Urmana, was released in 2010 to international acclaim.