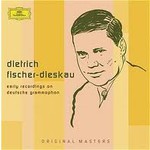 "This nine CD set is a valuable commemoration of Dietrich Fischer-Dieskau's inestimable contribution to song. It is a real and genuine tribute, for it gives a true overview of a remarkable career." (MusicWeb)

"This nine CD set is a valuable commemoration of Dietrich Fischer-Dieskau's inestimable contribution to song. It is a real and genuine tribute, for it gives a true overview of a remarkable career. This is especially important for listeners wanting to learn more about this amazing singer, because it shows his wide range, from baroque to opera to lieder and modern new music.

Fischer-Dieskau was always more than just a lieder singer. His grounding in the whole German tradition is important, because it suffuses all his work with special meaning. Indeed, the set is something of a primer for the history of voice : its value goes beyond the singer alone.

Fundamental to the German tradition is Bach. It could almost be said that Bach's combination of spirituality and art pervades the character of German song. Certainly, Fischer-Dieskau combined public reverence of the music with a distinctly personal intimacy. He brings out the human and universal that underpins what Bach wrote for the church. He senses a link between the baroque and the Romantic. He expresses the individual while contemplating the universal. In the 20th century, the conflict between individual and larger forces like war and society has only been too painful. Fischer-Dieskau's support for modern music arises from this basic worldview. Even as a very young man, he sought out composers who could express something distinctive.

Deutsche Grammophon spotted Fischer-Dieskau's potential almost from the beginning. It is no exaggeration that their partnership has helped to change the way we listen, especially to song. Their archive is a veritable museum. The selections on this set are excellent, some of them among the treasures of vocal art.

Fischer-Dieskau recorded so much, wisely or not, so it is Deutsche Grammophon's own interests to aim for a quality product that does them, as well as the singer, true honour.

Suitably, the set starts with Bach. The first two selections come from the June 1951 live recording at the Jesus-Christus-Kirche, in Berlin-Dahlem. Karl Ristenpart's chamber orchestra helped pioneer a sparer, more authentic Bach style. Fischer-Dieskau was ideally suited to this approach. These versions are fresher and almost as authoritative as later recordings with Richter. They must have sounded like a revelation at the time. Nine years later, in the same church, he recorded Handel's Giulio Cesare with Karl Böhm.

Fischer-Dieskau's very first recording for DG, Brahms' Vier ernste Gesänge, with Herta Klust, is another seminal moment in song history. The singer had barely turned 24 but already captured the profundity of Brahms' meditation on death.

With Klust again, the selections from Wolf's Italienisches Liederbuch are full of youthful vigour. With Elisabeth Schwarzkopf and Walter Legge, Fischer-Dieskau was to bring Wolf's music to widespread popular recognition. Working from text and meaning, their style developed as Wolf's own approach. It was to introduce a whole new era in Wolf interpretation.

Ferenc Fricsay was another early mentor. It is a pleasure to hear him conduct the singer in what was to become one of his "greatest hits" later with Jochum, and compare the difference in approach.

On, next, to 1957 when the complete disc devoted to Schumann was recorded. Fischer-Dieskau was to perform this numerous times, but this, with one of his finest accompanists, Jörg Demus, is particularly lyrical. With Günther Weissenborn, a few weeks earlier, he had recorded the Kerner and other Schumann songs. A few weeks later still, followed Brahms Die schöne Magelone, again with Demus. This disc is a vivid insight into how Fischer-Dieskau was singing that spring - still youthful but already a master.

Hans Werner Henze was a sensationally acclaimed opera composer in these heady post-war years. Fischer-Dieskau pursued him to write for him, thus starting one of the great partnerships of the decade. Henze notably loves writing for voice: his Fünf Neapolitanische Lieder provided the singer with a challenge, stretching the voice in new, beautiful directions. Similarly, Frank Martin himself conducted the Six Monologues from Jedermann, orchestrated less than four years previously. This disc also includes parts of Wolfgang Fortner's The Creation, for baritone and orchestra. New music meant a lot to Fischer-Dieskau, for whom music was meant to be a living, developing form. This disc could be an invaluable introduction to anyone wanting to explore modern music without the trauma that sometimes entails.

In complete contrast, the next two discs are devoted to opera, mainly to Gluck's Orpheus and Eurydike, which Fischer-Dieskau made something of a speciality. At this early stage his Wagner was limited to the Junger Seeman, but here are several charming arias from Pagliacci, Carmen and La Forza del destino. Opera may provide a livelihood for singers, but those like Fischer-Dieskau delight in discovering repertoire off the beaten track. One of the singer's trademarks was to compile programmes that explored ideas and composers, rather than merely to showcase his own talents.

Disc 8 starts with Meyerbeer lieder, which to this day have only been championed by a few such as Thomas Hampson. It also includes a series of settings of Goethe by composers who knew him personally - including Anna Amalia von Preussen herself, and Goethe's musical confidants, Zelter and Reichardt.

The set continues with other Goethe settings, accompanied again by Demus. Still aged only 35, Fischer-Dieskau's life was so filled with incident and interest that he was able to record his own reading of his memoirs, Erzähltes Leben, which concludes the set. Here, it is a very useful complement to the music because he discusses the period up to 1963 when his career was taking off, and when most of the material on this set was recorded. (Why the Goethe session with Demus from 1972 is included, I don't know, except that it fits) Although the reading is over in half an hour, there is no translation, just a summary, and is, in any case, interspersed with music.

While the notable exception is any Schubert, it seems that Deutsche Grammophon is planning a complete series commemorating Fischer-Dieskau's 80th birthday. Schubert would account for a set in itself! Contractual obligations may also explain other omissions from the early work. Nonetheless, this is an excellent collection, greatly to be recommended, particularly to those who want a reliable overview of Fischer-Dieskau's development at this crucial stage in his career...great value for money." (MusicWeb)