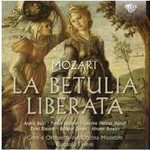 Wolfgang Amadeus Mozart is considered one of the most influential composers of all time. The child prodigy would become the author of some of today's best loved instrumental works, and a true king of sung drama. La Betulia liberata KV118/74c, the only oratorio he ever produced, was written by a relatively young Wolfgang whose potential is immediately obvious, even in his mid‐teens.

La Betulia liberata, rarely performed or recorded, was commissioned by Don Giuseppe Ximenes, Prince of Aragon, in 1771 while Mozart was undertaking a tour of Italy with his father, Leopold. The text, by Pietro Metastasio, is based on the story of the Book of Judith, which appears in the Apocrypha of the Bible, and the oratorio is written in a seria style.

The work also showcases the beginnings of a composer who would become famous for his employment of dramatic contrast and characterisation, as well as providing a psychological insight to his characters through the music. Two highlights are undoubtedly Nos. 11 and 14; in the former, the noblewoman Amital compares the plight of Bethulia to the desperation of a ship in a storm, portrayed in the music, and in the latter, Amital's changing mood is perfectly depicted as arrogance turns to docility - a forerunner to Mozart's more challengingly unstable female protagonists, Donna Elvira and Vitellia.

The recording boasts a wealth of critically acclaimed vocalists. They are accompanied by the Coro e Orchestra dell'Oficina Musicum, directed from the harpsichord by Riccardo Favero.