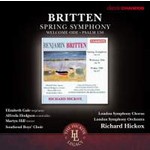 This re-release of the Spring Symphony, complemented by two smaller but equally life-confirming works by Britten, marks the composer's centenary year. It also forms part of our ongoing Richard Hickox Legacy series, which pays tribute to this great conductor who passed away five years ago. Hickox here conducts the London Symphony Orchestra with the soloists Elizabeth Gale, Alfreda Hodgson, and Martyn Hill, and a number of UK choirs.

The Spring Symphony is one of Britten's happiest and most celebrated works. Part symphony, part oratorio, and part song-cycle, this masterpiece requires large orchestral forces, a children's choir, three soloists, and a large SATB chorus. Originally Britten had considered setting mediaeval Latin poetry, but the 're-reading of much English lyric verse and a particularly lovely Spring day in East Suffolk, the Suffolk of Constable and Gainsborough', made him change his mind. Instead he found his inspiration in English poets such as Edmund Spenser, John Clare, John Milton, W.H. Auden, and Robert Herrick. In the words of the composer himself, this work not only deals with Spring itself but also 'with the progress from Winter to Spring and the reawakening of the earth and life which that means'. In view of the year in which this work was completed and first performed (1949), the dominant theme might also symbolise the emergence of Europe from the darkness of war.

The setting of Psalm 150 was composed in 1962 - 63 for the centenary celebrations of Britten's own prep school, Old Buckenham Hall School. It is a truly engaging and flexible work, which is evident from the score itself. Britten wrote it so that as many children as possible could be involved in the performance by playing a variety of instruments. So rather than naming specific instruments, Britten chose the looser characterisation 'treble instrument', i.e. anything from a recorder to a violin or flute, and 'bass instrument', which could mean a cello or a bassoon.

The spirited and infectious Welcome Ode for young people's chorus and orchestra was Britten's last completed work, written for the visit by the Queen to the Corn Exchange in Ipswich in July 1977 as part of her Silver Jubilee festivities.