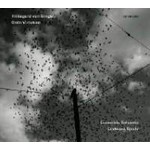 This is the second New Series album to feature the Stuttgart-based Ensemble Belcanto. Where its 2001 predecessor focused on contemporary composition by Wolfgang Rihm and others (Come un'ombra di luna - 4617192), this disc looks at Hildegard of Bingen's Ordo Virtutum, written around 1150 and generally considered the first large-scale musical work beyond the prescribed form of the Mass liturgy. This is sacred music reflecting Medieval thought, as music and morality play are intertwined.

In her creative interpretation, Belcanto leader Dietburg Spohr waives claims to 'objective' historical literalness. Instead, she and her fellow singers encounter the work as if it were written specifically for the Ensemble Belcanto: "We sought to free Hildegard from mysticalesoteric associations and to emphasize the work of an emancipated woman and composer." They have been performing the music of Hildegard von Bingen since the early 1990s, and view her compositions as a joyously experimental bridge between the Middle Ages and contemporary music.

Ensemble Belcanto was formed in 1986 by mezzo-soprano Dietburg Spohr, then a member of Clytus Gottwald's Schola Cantorum in Stuttgart, drawing on her experiences in improvisation as well as choral music, classical singing and new music performance. The group has been committed to adventurous programming from the outset, and many composers have written music for the ensemble.

"The variety of sounds they can produce is truly impressive, as is the virtuosity of the singers. And what is perhaps most important is the way Spohr resists the temptation to highlight or exaggerate the dramatic details of the Ordo." Gramophone Magazine, October 2013

"The approach in this case is not a search for historical authenticity...It confounds our comfortable idea of what Von Bingen's music might have sounded like or sought to express" MusicWeb International, 17th October 2013