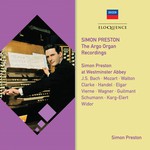 From 1962 (when he made his Royal Festival Hall debut) to 1967, and again from 1981 to 1987, Simon Preston held posts at Westminster Abbey, initially as sub-organist, then as organist and master of the choristers. These recordings were made during that first period: signing off the compilation in style, Widor's Toccata was in fact first to be recorded, in June 1963, as the voluntary within a recording of Evensong for the 'feast of the translation of Saint Edward, King and Martyr', commonly known a Edward the Confessor at whose command the Abbey was built, and consecrated in 1065.

The Abbey's organ is a rather more recent construction, built by Harrison & Harrison, and installed in time for the Coronation of King George VI in 1937, and thus still in fine working order when Preston made these recordings. On two days in February 1964 he recorded the Schübler chorales of Bach and the two works written by Mozart in his last year of life for a mechanical clock, imposing out of all scale to their commissioned instrument, but perfectly apt for their original, macabre purpose as funerary music to accompany the display of a life-size wax figure of a recently deceased Austrian general.

The music on CD2 demonstrates the extraordinary versatility of the organ, with repertoire that ranges from popular hits - what could be more familiar than The Prince of Denmark's March or the Pilgrims' Chorus from Tannhäuser? - to such largely neglected inspirations as Schumann's Study No. 5.