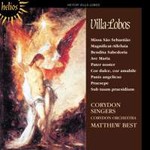 These works were written as part of Villa-Lobos's grand plan to revitalize music education in his native country. The human voice, an instrument acquired free of charge by every person in the nation, was seen by Villa-Lobos as the principal performing medium, particularly in massed choral form. Canto orfeônico (choral singing) became the order of the day. Among the performances Villa-Lobos directed was the Brazilian premiere of Palestrina's Missa Papae Marcelli.

This led to him to write his own a cappella Mass, Missa São Sebastião, St Sebastian being the patron saint of Rio de Janeiro, the major work on this album.

In fact The Missa São Sebastião had not been a sudden isolated instance of sacred composition from Villa-Lobos. From his earliest years as a serious composer he had written many motets. The Corydon Singers perform a rich selection of these.