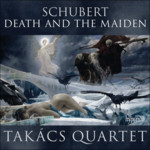 Hyperion's Record of the Month for October marks the debut on the label by the Takács Quartet. After seventeen years recording for Decca, including multi-awarding-winning cycles of quartets by Beethoven and Bartók, this thrilling ensemble is now embarking on a new relationship with Hyperion; future projects will include works by Brahms, Janácek and Schumann. Schubert's famous String Quartet, D810, subtitled 'Death and the Maiden', is one of the pillars of the repertoire. This new performance is electrifying, and was recorded following a global concert series, enthusiastically welcomed in the press: 'The Takács' reading of the second movement was characterized by unremitting pain and mystery. While three of the musicians intoned the insistent theme of Death in pursuit of the Maiden, Edward Dusinberre's violin expressed poignantly the Maiden's tender fragility and rising panic. The final movement, in the form of a somewhat crazed tarantella, was taken at breakneck speed, as if the four musicians were driving wild horses-though they never lost control of the reins. Risk-taking, a Takács trademark, certainly didn't fail here.' We have every confidence that this recording, and the Hyperion/Takács collaboration in general, will prove to be one of the brightest jewels in the Hyperion catalogue.

"The Takács have the ability to make you believe that there's no other possible way the music should go, and the strength to overturn preconceptions that comes only with the greatest performers. …though there's plenty of humanity in these recordings, there's nothing sentimental about the playing; they make Schubert sound symphonic, and a sense of drama and tensile strength underlines everything, even a movement as luscious as the Andante of the Rosamunde Quartet..." Gramophone Editor's Choce Awards issue 2006

"Schubert's two most accessible quartets receive interpretations on this disc which are as near ideal as one is ever likely to hear. In a time of great string quartet playing, the Takács Quartet stand out for the passion and the poise of their playing." BBC Music