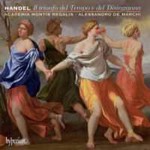 Il trionfo del Tempo e del Disinganno is a landmark in baroque music. It is Handel's first oratorio, product of his astonishing flowering in Italy in his early twenties, suffused with the youthful vigour and virtuosity of his early works .

The libretto, by the well-connected Benedetto Pamphili, is a highly crafted composition drawing on a rich mix of artistic forebears. It is both moral-religious allegory dramatized in music and a pattern book of human psychology.

"While this zippy recording falters at first - Marchi rushes his period Academia Montis Regalis rather sloppily through the dizzying opening - there is much accomplished, responsive playing and the tempo is always smart. Elsewhere, Roberta Invernizzi's luscious-voiced Belleza is the undisputed star, impressive in her many fiendish arias." (The Times)

"This new recording from Alessandro de Marchi and his lively Italian period band faces strong competition from Rinaldo Alessandrini (Naïve) and Emmanuelle Haïm (Virgin)...But de Marchi's crisp, surely-paced direction has none of his rivals' occasional tendency to exaggeration and (in Haïm's case) indulgence...With her pure, pellucid timbre and acute response to the text, Roberta Invernizzi eloquently limns Beauty's journey from blithe, carpe diem heedlessness to the grave simplicity of her final prayer. As Pleasure, mezzo Kate Aldrich is equally good in seductive mode and hurling out splenetic coloratura. Martin Oro's distinctive, slightly feminine countertenor makes its mark as Enlightenment; and if Jörg Dürmüller's tenor has a touch of grittiness, he matches his colleagues in dramatic intelligence." (Daily Telegraph)