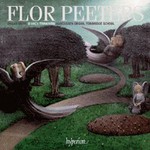 "Although it must be a daunting challenge to reduce Peeters's vast organ output down to a 75 minute representative selection, Trinkwon has managed successfully to cover most angles...the playing is mostly top-notch, with the Tonbridge Marcussen ideally suited to Peeters's clear countrapuntal [sic] voice-leading." Gramophone

The Flemish composer-organist Flor Peeters was celebrated in his lifetime with a concert career that took him all around Europe, as well as to America, South Africa and Australia, while remaining the organist of St Rombout's Cathedral in Mechelen. He was trained as a Catholic church musician and Gregorian chant and the medieval modes remained a lifelong inspiration for his music.

His mature music is often described as neoclassical, and most of it is essentially polyphonic, with an emphasis on simplicity and clarity, transparent linear textures and pungent, incisive tone-colours. Peeters was an almost exact contemporary of Maurice Duruflé, who shared his love of plainsong and the modes. But where Duruflé, with a typically French sensibility, conjured subtle impressionist soundscapes from his modal language, Peeters preferred sharper contours and brighter colours-Van Gogh, perhaps, compared with Duruflé's Monet.

This disc includes a wide selection of his works for organ, encompassing large-scale concert works as well as some of his many chorale preludes. Peeters' vast and expertly crafted oeuvre-matched in its size and scope only by a handful of other organ composers - displays great contrast and imagination.