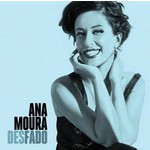 "Ana Moura is one of Portugal's finest fado singers, celebrated for her passionate style and her exploration of both traditional and so-called musical fado, in which a wider set of songs are treated to a fado setting; one of her best live songs is the Rolling Stones' No Expectations. Now she has cut her long black hair and travelled to Los Angeles to work with Larry Klein, former producer (and husband) of Joni Mitchell. The result is a pleasant if patchy set. Her singing is exquisite as ever, but the addition of extra instrumentation to the guitar-based fado trio is often a mistake - the one exception being the fine jazzy keyboard work from Herbie Hancock on Moura's English-language love song, Dream of Fire. Elsewhere, she aims for the crossover market with a breathy treatment of Mitchell's A Case of You, but she's best with pained, no-nonsense songs such as A Fadista." The Guardian