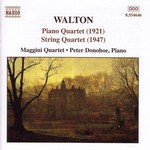 "The Maggini Quartet give refined and powerful performances in this Naxos release. The opening of the 1947 String Quartet is presented in hushed intimacy, making the contrast all the greater when Walton's richly lyrical writing emerges in full power. There's a tender, wistful quality here, which culminates in a rapt, intense account of the slow movement, where the world of late Beethoven comes much closer than most interpreters have appreciated. The poignancy of those two longer movements is then set against the clean bite of the second movement Scherzo and the brief hectic finale, with their clear and transparent textures. With Peter Donohoe a powerful and incisive presence, and the Maggini Quartet again playing most persuasively, the early Piano Quartet is also given a performance of high contrasts, enhanced by a refined recording which conveys genuine pianissimos that are free from highlighting. If, in the first three movements, the pentatonic writing gives little idea of the mature Walton to come, some characteristic rhythmic and other devices are already apparent. Even the pentatonicry suggests that the boy had been looking at the Howells Piano Quartet rather than any Vaughan Williams. It's in the finale that one gets the strongest Waltonian flavour in vigorously purposeful argument, though there the echoes are different, and Stravinsky's Petrushka is an obvious influence. The only reservation is that the piano is rather too forwardly balanced." - Gramophone