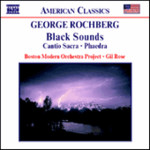 George Rochberg was born in Paterson, New Jersey, on 5th July, 1918. He studied composition at the Mannes School of Music in New York from 1939 to 1942 with Hans Weisse, George Szell and Leopold Mannes. During World War II Rochberg served as a Second Lieutenant in the infantry in Europe. Of this period in his life the composer has said: "The war years were much more than an interruption in my musical studies. They taught me what art really meant because I learned what life really meant. The war shaped my psyche and precipitated my internal development. I came to grips with my own time. I came to the necessity of the twelve-tone method independently of the few other American composers who turned to it after the war."

After fighting in Europe in the Second World War (he was seriously wounded in Normandy), Rochberg returned to Philadelphia, where he studied at the Curtis Institute and the University of Pennsylvania. His works quickly gained attention, and in 1950 he left for Italy, having won both the Rome Prize and a Fulbright fellowship. In Italy Rochberg became friends of the anti-Fascist composer Luigi Dallapiccola (1904-1975), then the leader of the Italian serialist avant garde.

Actively engaged in teaching composition at the University of Pennsylvania he continued to wrestle with the problems of contemporary music. During the 1950s and 1960s Rochberg wrote a number of influential critical and theoretical articles which have appeared in leading music magazines and journals in the United States and Europe. These writings reflected his constant search for and preoccupation with musical truths. By the mid-1960s Rochberg broadened his compositional range to include tonal idioms. But in 1961 the Rochbergs' seventeen-year-old son, Paul, fell ill with a brain tumour. He died three years later, throwing his father into despair. Confronted with his son's death, Rochberg struggled to give that tragedy some meaning through his music, but the serialism upon which his career had been built he now found empty and meaningless. It was a language that could not bear the weight of his sorrow. But while Rochberg rejected serialism, he did not reject the atonal composition out of which serialism had grown and which characterized its harmonic syntax. Instead, Rochberg began to construct his music out of both tonal and atonal languages. In so doing, he dramatically reinterpreted the notion of stylistic uniformity that had been a hallmark of the Western aesthetic since antiquity. He refused to abandon "past" musical styles, insisting that they continue to live - transformed by his individual artistry but recognizable nonetheless - in his new art. By including these diverse forms of music, Rochberg believed that he had expanded the emotional range that modern music was able to express. He had found a contemporary language that could both bear the weight of despair and point to transcendence, and, unlike either strict serialism or aleatoric composition, it was a language that was pointedly individualistic.