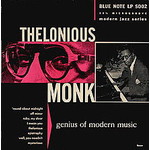 Genius of Modern Music: Volume 1 is the name given to at least four different compilation albums by jazz pianist, Thelonious Monk. Each version comprises some of Monk's first recordings as band leader for Blue Note, recorded in 1947 (and sometimes 1948). The original LP with this title was compiled in 1951.

It's impossible to overstate the importance of these sessions. They include some of the earliest recordings of Monk compositions that would become standards, despite their angularity and technical difficulty; some rank as the most frequently recorded jazz compositions ever. An album that belongs in every jazz collection.