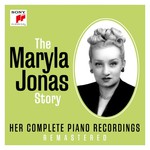 Maryla Jonas, a Polish-born concert pianist, made her U.S. debut at Carnegie Hall in February, 1946. As a newcomer, she received favorable reviews, but the next month Olin Downes, reviewing a recital before a crowded house in the same hall, wrote in The New York Times that "she has few equals as an interpreter among the leading pianists of today."

As a child prodigy, Jonas made her debut in Warsaw at the age of 9 and became a pupil of Ignacy Jan Paderewski. She won an International Chopin Prize in 1922 and the Beethoven Prize of Vienna the next year. She was in bombed-out Warsaw when it was captured by the Nazis, but escaped in 1940, a feat that was described later as "miraculous." Walking day and night, she traveled 325 miles to the Brazilian Embassy in Berlin. From there, Jonas went to Rio de Janeiro, where her married sister, Mrs. Bertha Holin, then lived, and entered a sanitarium. Later she heard that her first husband, a noted criminologist, her parents and a brother had been killed in Poland. In Rio, Miss Jonas gave up playing for months. It has been said that her fellow countryman, Arthur Rubinstein, induced her to return to the piano. She toured South America to obtain funds to come to New York.

Almost five years after her debut at Carnegie Hall, Miss Jonas fainted in the wings of the same hall after leaving the stage part way through her performance of Schumann's "Carnaval". She recovered quickly and completed her program. Her illness forced her temporary retirement, but in December, 1956, she gave what was to be her last recital at Carnegie Hall. Maryla Jonas died on the 3rd of July, 1959 at her home of a rare blood disease that had hindered her career in recent years. Her age was 48.