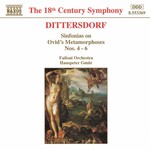 Six of the twelve Symphonies after the Metamorphoses of Ovid survive in their original form. These were written in 1783 and introduced to the public in Vienna three years later, when Dittersdorf had occasion to visit the city for the first performance of his oratorio Giobbe (Job). He relates in his autobiography how, by special permission of the Emperor, he had arranged to have six of the symphonies performed in the Augarten, an event for which Baron van Swieten, arbiter of, musical taste at court and patron of Mozart and Haydn, had taken a hundred tickets. Bad weather led him to try to postpone the concert, but difficulties arose when he sought permission from the police, since a new decision of the cabinet was needed for any such change of plan. Dittersdorf was obliged to seek out a court official to authorise the postponement and in doing so found himself in conversation with the Emperor himself, an event that he recounts in some detail.