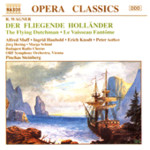 "Pinchas Steinberg on Naxos proves a warmly sympathetic Wagnerian. More than most rivals, he brings out the light and shade o this earliest of the regular Wagner canon, helped by the refined, well-balanced recording, and by brilliant, sharply dramatic playing from the orchestra. The chorus too sings with a bite and precision to match any rival. Alfred Muff as the Dutchman attacks the notes cleanly, with vibrato only occasionally intrusive. The vibrato of Ingrid Haubold is more of a problem but, except under pressure, it is well controlled, and she begins Senta's Ballad with a meditative pianissimo. Both tenors are excellent, Peter Seiffert as Erik and Joerg Hering as the Steersman, and though Erich Knodt, rather gritty in tone, is an under characterful Daland, his Act II aria is light and refreshing thanks to Steinberg's fine rhythmic pointing. The recording is both atmospheric and clear, and the set comes with libretto, translation, notes and detailed synopsis, an outstanding bargain." Penguin Guide