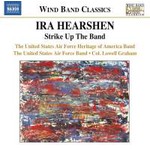 Ira Hearshen is one of America's most popular and successful orchestrators and arrangers. He has written for many Hollywood films, such as Toy Story and The Scorpion King. He has also written for the concert stage, especially wind band, notably his Pulitzer Prize-nominated Symphony on Themes of John Philip Sousa, which is adventurously constructed, richly melodic and colorfully scored. His unique takes on Strike Up The Band and There's No Business Like Show Business provide moments of rich humor whilst the Divertimento for Band mines the American jazz vernacular with true rhythmic verve.

Ira Hearshen's music is colourful and hugely approachable. It's often also laced with broad humour and wit. The Divertimento has been recorded on a compilation album called Rendezvous released by a number of American composers' band music back in 2001 (Klavier Record) and on a couple of Mark Records discs by the US Air Force Band, again compilation CD. The Symphony is also on a Mark Records compilation disc released in 2003.

Berlin, I: There's No Business Like Show Business (arr. Hearshen)
The USAF Heritage of America Band

Gershwin: Strike Up the Band (arr. Hearshen)
The USAF Heritage of America Band