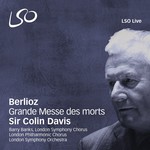 Sir Colin Davis is a revered Berlioz expert and his LSO live Berlioz recordings have been one of the most widely acclaimed series' of classical recordings of recent years and collected numerous awards, including two Grammy Awards for Les Troyens.

The release of the monumental Grande Messe des morts marks the completion of this cycle and further confirms Sir Colin's status as one of the greatest living conductors of Berlioz's music.

Recorded in St Paul's Cathedral, a fitting acoustic for the work, the London Symphony Orchestra opened the 50th anniversary of the City of London Festival with the requiem, joined by English lyric tenor Barry Banks and two of London's finest choirs, the London Symphony Chorus and London Philharmonic Choir.

Grand Messe des Morts is a popular Berlioz creation, yet remains a rare and special treat. A requiem whose text derives from the traditional Latin Requiem Mass, it was composed, uniquely, by a man with no firm religious belief. Throughout the piece there is an extreme variation of dynamics. Poignant, reflective music is contrasted with four blazing brass ensembles, ensuring a very powerful and grand listening experience.

"The St Paul's acoustic is something to be reckoned with...and it is striking to observe how careful Davis is to allow for the famous echo...There's some lovely orchestral detail...The chorus is excellent...Barry Banks, sounding some way off, is effortlessly mellifluous. Whether in 2012 or 1969, Colin Davis is a must-have." (Gramophone, Editor's Choice - June 2013)

"the enigmatic rising phrases that launch the work continue to reverberate hauntingly in the surrounding silences, and the tone of the combined LSO and LPO choirs - singing beautifully and bringing out the music's profound sadness - is wonderfully enhanced. Colin Davis fits the work to the conditions with a master hand. Memorable." (Sunday Times)

"Everything about it is judged as just right, and Davis is one of the few who consistently realizes that the lyrical propensities of the composer are as important-especially in this work-as the more grandiose and bombastic passages. As an interpretation this is as good as it gets, the equal of any recording on the market." (AudAud.com)