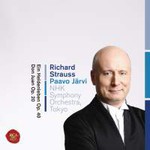 This is the first recording of the NHK Symphony Orchestra, Tokyo, and its current chief conductor, Paavo Järvi. Features two of the most popular tone poems by Richard Strauss, Ein Heldenleben and Don Juan. Recorded live in Suntory Hall, Tokya, which is one of the most renowned concert halls all over the world, with optimum DCD technology. Paavo Järvi and NHK SO will visit seven major cities in Europe in February and March 2017 - their first-ever European tour. Celebrating its 90th season, NHK SO has the longest history among Japanese orchestras, with a rich and long tradition of performing the music of Richard Strauss under such illustrious conductors: Herbert von Karajan, Wolfgang Sawallisch, Othmar Suitner, Lovro von Matacic, Horst Stein, Charles Dutoit and Vladimir Ashkenazy Amongst others.

"Järvi's Don Juan is thrillingly precise and pinpoint, and characterised by a real momentum and Schwung. The main virtues of his Heldenleben are clarity, control and impeccable orchestral discipline, all the more impressive given the fact that these are live recordings…an account, along with its excellent coupling, that's well worth hearing" Gramophone

"Supremely vivid Strauss, guided by the surest of conducting hands…[this] series - may it be all the symphonic poems - can only go from strength to strength. Amazing work." BBC Music Five Stars Recording of the Month - May 2017