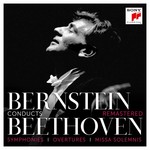 Celebrating Beethoven's 250th anniversary and following Bernstein's centenary in 2018, Sony Classical is proud to re-release Bernstein's first recorded cycle of Beethoven symphonies, made with the New York Philharmonic between 1958 and 1964  Also included are a collection of Beethoven overtures, first released in 1970, and the Missa solemnis recording of 1960. This stunning collection includes 7 CDs newly remastered from the original analogue masters using 24 bit / 192 kHz technology, 3 CDs remastered in 2017  Soloists include the renowned operatic sopranos Martina Arroyo and Eileen Farrell, and revered bass Kim Borg  Bernstein described Beethoven's work as "Perhaps the closest music has ever come to universality", an aim to which Bernstein himself aspired through his composing and education work, as well as his conducting. These recordings, presented in vivid detail, are a testament to two great musical communicators.