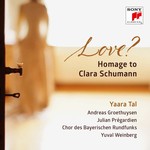 Composer and piano virtuoso Clara Schumann played an influential role both on Robert Schumann and her musician friends such as Brahms and Kirchner. The compostitions on this album express deep feelings of love, affection and friendship.

Also included is Johannes Brahms' "Old Rhapsody" in a version for tenor, female choir and piano. Tal has recorded this version with tenor Julian Prégardien and the Bavarian Radio Choir under the direction of Yuval Weinberg.

In the course of her "Hommage à Clara Schumann", Yaara Tal can also be heard with her longtime piano duo partner Andreas Groethuysen, who jointly recorded the "Variations on a Theme by Robert Schumann" for four-hand piano, which Brahms dedicated to Julie Schumann in 1861.