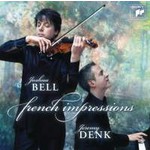 This is Joshua Bell's first CD of Sonatas on Sony Classical and it is a passionately nuanced interpretation of works from Saint-Saëns, Franck and Ravel. Joshua Bell is one of the world's most successful violinists and has won multiple Grammy awards, was awarded the prestigious Avery Fisher Prize and named Instrumentalist of the Year by Musical America. Bell was recently named Music Director for the Academy of St. Martin in the Fields becoming the first person to hold this title since Sir Neville Marriner founded the Orchestra in 1958.

Often referred to as the "poet of the violin", his 2004 album Romance of the Violin was named the "Classical CD of the Year" by Billboard Magazine, with Bell named "Classical Artist of the Year."

The three Sonatas chosen for this disc are very different though linked extraneously through their inherent national style:

The Saint-Saëns sonata remains one of the most exciting sonatas in the repertoire; the feverish finale is guaranteed to bring the house down. Bell's recording of César Franck's Violin Sonata allows him to pay homage, through his mentor Josef Gingold, to the two great artists who created this undying masterpiece. Written 125 years ago, at the height of the French Belle Epoque for the wedding of his friend, the virtuoso Eugene Ysaÿe (with whom Gingold studied). Ravel's more fantastic sonata offers a kaleidoscope of different thrills, as seen in the unexpected yet beautiful blending of genres in the slow "Blues" movement of his sonata.

"French Impressions is the culmination of my last decade of exploration and performance with pianist Jeremy Denk, and I hope that with this recording we can affect the listener with the same joy and spiritual enrichment that these masterpieces have provided us with over the years." Joshua Bell

"Joshua Bell plays with fire and finesse, with Denk a powerful ally. Franck's dark-light violin sonata, mysterious, ardent and far more than the sum of its parts when played as majestically as here, forms the centrepiece of this seriously beguiling disc. A first essential purchase for 2012." Observer

"a spirited, varied, sensitively imagined recital...[Bell and Denk] are on equal terms artistically, responding to one another with spontaneity and unanimity in the interpretation of nuances that give their playing a sense that they are inside the music." Daily Telegraph

"Joshua Bell and Jeremy Denk, a notably well-matched team, give idiomatic performances of these three sonatas...They're especially adept in maintaing the flow of the musical narrative and, with it, the music's emotional flux....Bell is especially impressive in the moto perpetuo finale - not only thrillingly precise but full of colour and variety, too" Gramophone

"Bell attacks the will o' the wisp final movement [of the Saint-Saens] with a featherlight string of 16th notes that's quite dazzling." The Independent